Five days in the field 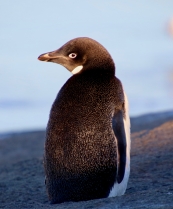 Everyone says the Antarctic summer at Mawson is short – and now I know why. The station celebrated the end of summer last night by transforming into a casino and festivities went on until the wee small hours. Field travel off the station finishes up today. The works program wraps up this Wednesday, then on Thurs and Fri all hands join in for a massive station cleanup in preparation for the new winter crew’s arrival. It’s all coming to an end quickly (though there’s still a very long voyage home). 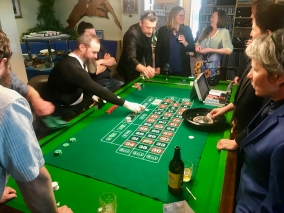 I decided to take every opportunity to go out and explore this incredible place before heading home.

Last Saturday was climbing Mount Henderson – a scramble up a scree slope to a rocky outcrop near the summit, and then roping up for a two-pitch climb to the top. Notice how casually I dropped that in? Having never climbed with ropes before, this was quite something for me. The first two 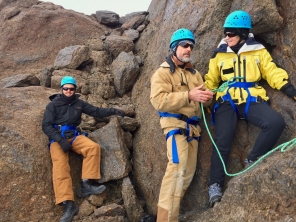 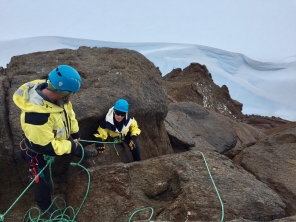 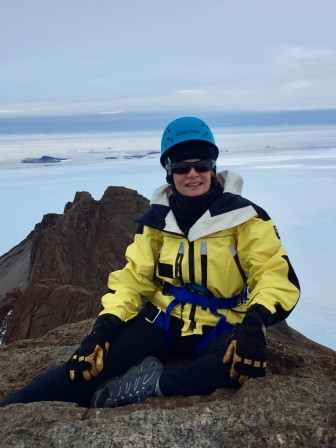 steps were fine and then I had no idea what limb to move or how to get myself up. Had to just launch skywards, forget about dignity, scramble and hope for the best. Rather to my surprise I made it. At the top – an incredible vista of the surrounding mountain ranges and the ice plateau stretching south forever.

Tuesday, the station’s field training officer Mark took Donna the chef, plus Jane and me, out to visit the old Russian aircraft. The plane was damaged while trying to take off from the plateau back in 1965 and then later flipped over during a blizzard, marking the end of its flying days. Legend has it the hapless pilot was sent to a Siberian gulag. In 1968, following the Russian invasion of Czechoslovakia, a Czech bulldozer driver working at Mawson took a machine up the hill and wreaked vengeance on the plane, leaving the crushed and twisted remains visible today, slowly being carried down the plateau in the ice.

To get to the plane we travelled up the plateau in a Hagg, then got geared up for glacier travel to cross a crevasse field – four of us helmeted, harnessed and roped together, with ice axes, crampons and lots of dangling bits of equipment and rope for a rescue situation in case anyone fell through the ice.

Yep, I’m cool with this, no problem. Another day, another crevasse field. 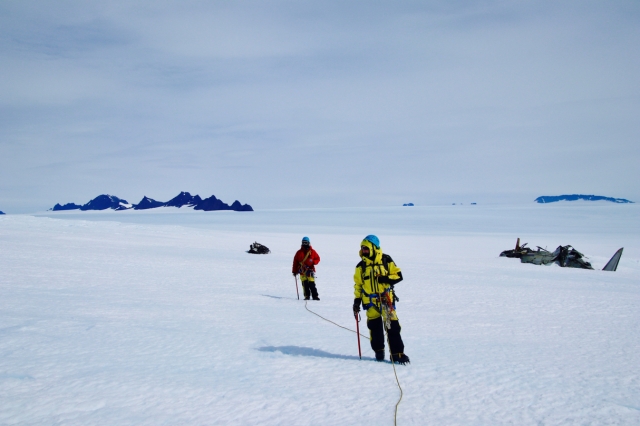 It felt like walking over honeycomb – on the surface the ice was white and frosty, quite snow-like. Then I’d glimpse a crack with the blue deepening to indigo as it went deeper and deeper – and I realised that under my feet was a huge network of cracks and cavities in the ice. Most of them were invisible. Although they appeared to be narrow, falling into one can be dangerous. 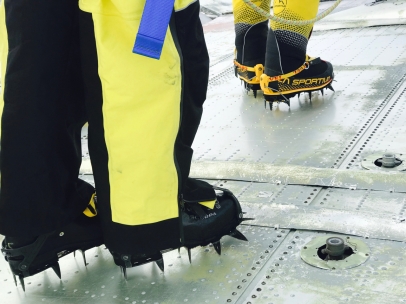 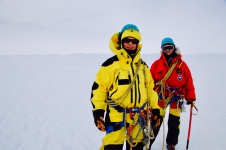 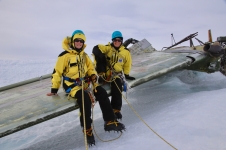 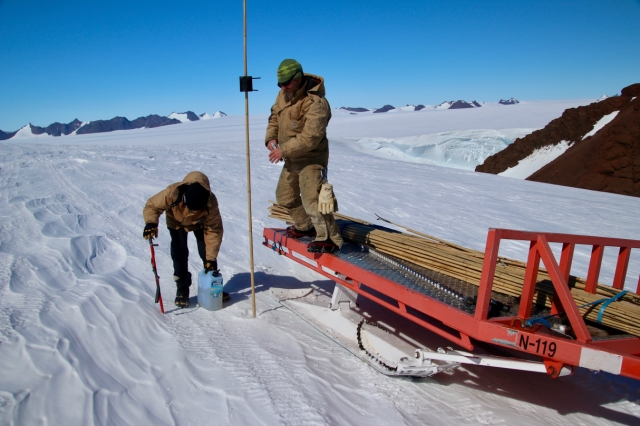 Thursday and Friday – the chance to go on two final caning trips with Mark, drilling holes and installing bamboo canes on the travel routes at the far edge of station operating area. Jane and I did a lot of caning over the season – it was a great chance to get out, and good to contribute to an important station job. Plus a caning trip means using power tools, always a bonus.

Back to the station on Friday afternoon and a two hour turnaround, out again for the final trip – an overnight jolly to Rumdoodle Hut with a Nick and Curly. Beer and cheese on the balcony watching the sunset, a ten minute moonrise and fall, dinner and yarning and playing guitar in the hut, and then spending my last night in the field in a bivvy bag on the ground. The next day we met up with another field group and hiked up another mountain. A beautiful final chapter to my off-station adventures. 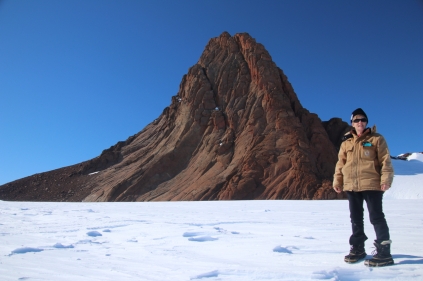 Being out in the field has been both glorious, and challenging. I’ve experienced something close to rapture in that incredible landscape – a sense of expanding into it and feeling a kind of communion. And I’ve had the opposite experience too – of feeling incredibly small-minded, as if the immensity around me magnifies obsessive thoughts.

I’m very glad to have slept on the ground for my last night – there’s something very beautiful about that physical connection with the land.

Now a new phase starts – the wrap up. In true Antarctic fashion, a high degree of uncertainty now reigns. The ship is on the way, but might arrive early or late. If there’s still too much sea ice around, it will have to do a modified station resupply – parking out past the sea ice and using choppers to ferry people and cargo back and forth. Jane and I will be the first ones sent off station (our beds are needed for the new crew) and will start our month on the ship, possibly as early as next weekend. However, if the sea ice has melted enough, the ship can anchor near the station and the resupply will be done by barge. In that case I may be able to come back to the station every day – and may even get out into the field again to work with the bird biologists.

I’m cultivating an attitude of open heart and no expectations. And beginning the process of saying goodbye to this incredible place. 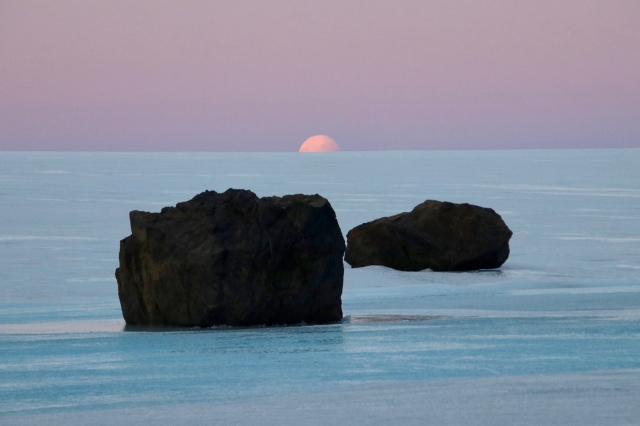 6 Responses to Five days in the field