A dream with wheels

In 2014, Dave Eggers – author, storyteller, publisher and radical ambassador for kids’ creativity (not to mention mind behind the best book title ever: A Heartbreaking Work of Staggering Genius) visited Sydney and spoke about his work on youth literacy in the inspiring organisation 826 Valencia.

It galvanised an idea that had already been stirring inside

me. I dreamt of starting up a kids’ creative writing centre – like 826 Valencia, Sydney Story Factory and 100 Story Building in Melbourne – but here in Northern NSW. I was the first author to ever visit St Mary’s primary school in Casino, and I worked with kids in Lismore, Bexhill and Tuntable Creek, so I knew first hand how hungry they were for stories and creativity. On indicators including social competence, communication skills and general knowledge, Northern Rivers kids scored lower than other parts of NSW. But our regional schools didn’t have a culture or tradition of author visits.

I was on the Board of Byron Writers Festival. At our annual visioning day I presented the idea and got the board’s blessing to pursue it. I started a small working group and one of the volunteers – Hayley Katzen – put forward what became the founding idea of StoryBoard. We didn’t need a creative writing shopfront, much as we loved the crazy shops fronting the creative writing centres: the Martian Embassy (Sydney Story Factory), The Pirate Supply Store (826 Valencia, San Francisco), the Greater Boston Bigfoot Research Institute (826 Boston) and Hoxton Street Monster Supplies (Ministry of Stories, London).

In a widely spread region, we needed a way to take

authors and illustrators directly into our local schools to run the kinds of workshops that these organisations offer.

The idea of the StoryBoard bus was borne – a magical story bus embodying creativity and the ‘weirdness’ that Dave Eggers says is the key to making these places work for kids. We took the dream to Byron Writers Festival kids’ tent and asked them to dream with us – resulting in sketches of a five story bus that farted fairy floss.

The real work began in 2015 – raising funds to make the vision a reality. Countless grant applications led to some seed funding from Arts NSW – enough to run a small pilot. In 2016 Byron Writers Festival appointed Coralie Tapper as the project manager, and we planned 25 school visits with two brilliant kids authors from the region – Tristan Bancks and Samantha Turnbull. StoryBoard was a reality- but without wheels. 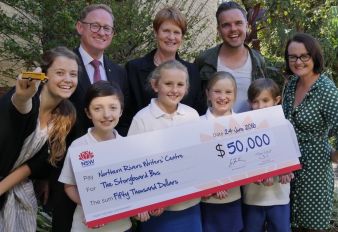 More funding applications. A couple of local politicians got behind our efforts: Ben Franklin MLC and Justine Elliot MP – thanks to their efforts, we raised enough money to buy a bus and fit it out. And then, just before Christmas the news came – we were awarded a $300,000 grant from Catalyst over three years. StoryBoard was a reality.

We had wheels and we had to get up to speed fast for 2017. Coralie doubled her work

hours, we called for design proposals to transform the iron grey Hastings Valley Community Transport bus into StoryBoard, and chose an incredible design presented by animator Justine Wallace. She set to work, and we began calling for authors, volunteer tutors and schools.

Last Friday it all came together with the launch of the StoryBoard bus in all her glory, by special guest Leigh Hobbs, author/illustrator and Australian Children’s Laureate. This year the bus will make more than 100 school visits – all of them free. Our authors and illustrators are paid at Australian Society of Authors rates.

And here is the moment it was revealed:

Kofi Annan, former UN Secretary General, says: “Literacy is a bridge from misery to hope. For everyone, everywhere, literacy is, along with education in general, a basic human right… the road to human progress and the means through which every man, woman and child can realize his or her full potential.”

It is the realisation of a dream for me. Can’t wait to see how StoryBoard ignites the imagination of our local kids – and some adults too. 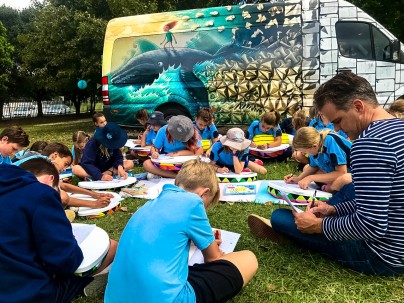 2 Responses to A dream with wheels