Half a world away

I’m still half a world from home – but now it’s the other half. Flew into Dubai last night and my eyes are still adapting to bright light and flat horizons instead of the soft grey mist and green forested hills of south east Alaska.

I’ll back up a bit. Last Wednesday it was time to say my sad goodbye to Sitka – to new friends and old, to an adventurous time, and to my aunt Carol. We became even closer over the month, and although we had the odd bump along the way, our friendship grew and deepened and we delighted in each other. It was a precious time. We shared the story of our month in our final reading and presentation – a bit of a romp of conversation, photos and readings at the library.

And our last night was spent in the company

of the Blue Canoe Writing Group – it felt as though we were leaving lifelong friends at the end of the evening. 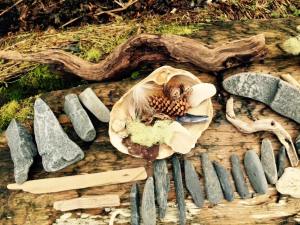 I was badly organised and so spent my last day rushing around in a panic rather than making a measured farewell (thanks to Blossom who ferried me around on errands!). Wish I had allowed more space to wander outside and say goodbye to that beautiful land, but I had to let Carol do that on my behalf, and ‘release’ all of our rocks, sticks, pine cones, bones, shells etc back into the wild, in a gorgeous arrangement.

I hopped on a plane and headed to San Francisco. Two reasons – firstly to visit my aunt Margaret (Dad’s sister and my godmother) and Uncle Ben (there’s an auntie theme to this trip, isn’t there?) and 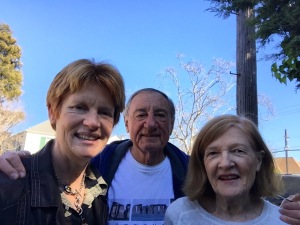 secondly to find out more about 826 Valencia, the first in what’s grown into a network of centres across the USA and the world, teaching kids how to write and fostering a love of literature.

That sounds rather high-brow – the reality is anything but. You enter 826 Valencia through a Pirate Supply shop on the street front. Other 826 centres have set up
shopfronts including the Greater Boston 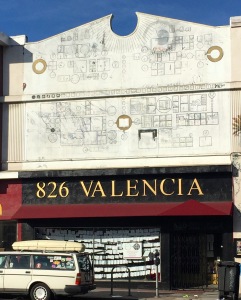 Bigfoot Research Institute, the Secret Agent Supply Company, the Time Travel Mart and the Robert Supply and Repair shop. The Sydney Story Factory, which sprang from the same idea, fronts Redfern Street as the Martian Embassy.

The idea is that the whole experience, from the moment of walking in the front door, is wacky and fun. Author Dave Eggers who was one of the founders of 826 Valencia, said his main bit of advice for new centres: “Keep it weird”. Don’t let it become like school.
I’ve observed a class at Sydney Story Factory and

marvelled at how the Storyteller-in-Chief made every step of the process fun and relatively easy. Same thing at 826 Valencia. I joined a morning “Field Trip” in which kids from a nearby school came in – wide-eyed and excited through the shop – and spent two hours coming up with a story idea, including setting and characters, and working out their own endings. Helped by a bevy of adult volunteers (a scribe, an illustrator, the teacher and the never-seen Captain Blue who yelled out threats and instructions from his hidden office upstairs), they walked out at the end with their own printed and bound books. In the afternoon, 826 runs a homework support program. Kids get reading and writing time as well as help to complete their homework. And there are other programs too.

According to Dave, the project is neighbourhood-changing and world-changing. Listen to his acclaimed TED talk here if you’re interested.

My purpose in visiting 826 Valencia is a fact-finding mission. Can we start something similar in Byron Shire (under the auspices of the Northern Rivers Writer’s Centre)? We’re not San Francisco, Boston, or Sydney. Can it work in a small town? The Island Institute is early in the process of setting up the Sitka Story Lab – a kind of scaled down version of 826 Valencia – and it was great observing how it worked during my month there under the enthusiastic leadership of intern Sally Helm.

When I get back, it’s time for some serious conversations with the board of the writer’s centre. It needs vision, money and energy. There’s huge enthusiasm and excitement from all of us – the next question is can we make it a reality?

Today’s reality – I’m looking down from the 15th floor over the glassy waters of Dubai Creek. A yellow scull glides past, and behind that a throbbing highway. In the distance, in the pale light, a gaggle of buildings including the tallest one in the world. It’s a bit surreal. I’m here as a guest of the Emirates Airline Festival of Literature and feeling like a very small Australian fish in a very large pond – I don’t know anyone here yet. It’s exciting and daunting to be a guest of the largest literary festival in the Middle East.

Time to put my big girl plants on and meet the other writers. Wish me luck.

2 Responses to Half a world away