Posted on February 6, 2015 by Jesse Blackadder

Sitka is known for its Weather. Capital W weather – the sort that sends weeks on end of 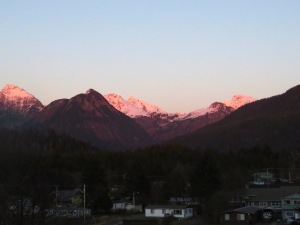 cold, driving rain. Which apparently were the conditions prior to our arrival. But we continued our good luck streak with weather (bringing huge surf to Hawaii and breaking the snow drought in Alaska’s north) and our arrival brought a week of fine, sunny weather. So brilliantly fine that it’s been impossible to stay inside. Yesterday, seeing that it was the last sunny day forecast for a while, I decided to strike out for the mountaintop, and climb Gavan Hill, a steep forested slope that I’ve been looking at each day while I work. 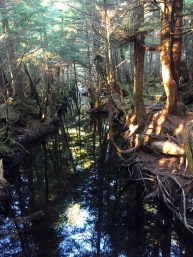 The town of Sitka sits on a strip of flat land between the foot of Baranoff Island’s mountain ranges and the shoreline of the north east Pacific Ocean. These forests are known as the Tongass – thick, temperate rainforest of tall spruce and hemlock trees, full of moss. For us southerners it’s like stepping into the Lord of the Rings – the kind of deep, dark forests we imagined when hearing fairy tales. It’s kind of gloomy and damp inside them, and you have to watch your footing as parts of the trail have frozen to black ice.

Off I set, with my bear spray (just in case) and a set of crampon-like boot chains that I could put on if I reached ice. And no, bear spray is not like hair spray. It’s a very strong pepper/capsicum spray that you unleash if being charged by a 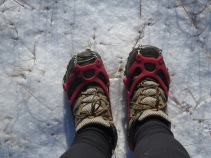 bear, once it gets about a metre away. A kind of final defense that presumably takes some presence of mind to operate correctly. Most bear charges are mock charges anyway, so I hear. Plus all the bears around here should be asleep. But I felt happier carrying it. (Though today our neighbour shook her head and told me to forget the spray and carry a gun.) 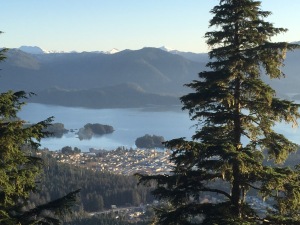 Into the gloomy forest (with bars of sunlight filtering through) and up and up and up… Until I well and truly realised I’m not very fit. Never mind bears, I was more worried that I’d have heart failure. It was a goodly climb of about 3km up – it felt like much more – and I wondered if I had the gumption to complete it. (Yes I did start at sea level – hope the pic shows something of the climb)

Heart pounding, I reached an opening in the trees and stepped up into another world. The forest thinned out around me, opening to undulating rocky grasslands lightly layered 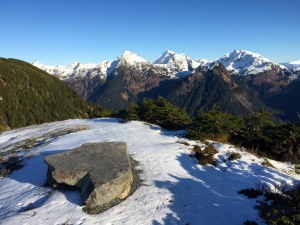 in snow, bonsai-style trees beaten to miniature by the temperature and wind, bathing in sunshine under a brilliant blue sky. I was on the top – and in every direction was an incredible vista – the snow covered mountains stretching back as far as I could see, the sweep of the Pacific Ocean and the hundreds of tiny, forested islands scattered through Sitka Sound, the nearby white-topped volcano, and far below the little township of Sitka nestled by the water’s 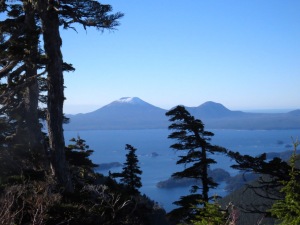 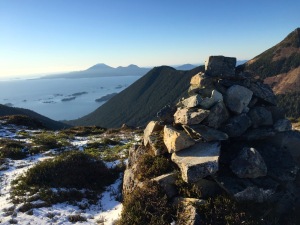 Cue the Julie Andrews moment. Luckily I remembered in time that I inherited Von Blackadder Family genes in the singing department, so I sang a kind of silent ‘Hills are alive…” instead, crunching over the frozen snow and feeling an expansive exhilaration. OK, I get why people climb mountains. This is why. That place at the top is superb. Not that I would ever do hard climbing – walking up a mountain with a fairly flat top is my style – but I reckon the feeling might be similar to clambering up a steep summit and standing with one crampon resting on the top. Wow.

It was still early in the day, so after eating my body weight in trail mix to restore my 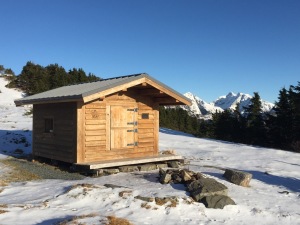 energy, I set out for the next 3km stint, across the ridges of the high country to a little alpine hut that I guess is an emergency shelter up there. Not sure what I expected to find there – but it is what it says – a hut. Nothing else. A little dustpan and broom is all that’s inside. For a bit of emergency housework I guess.

A little more silent interpretive dancing for joy and then it was time to head back, scrunch scrunch across the crusted snow of the ridgelines, back to the forest edge and then

down down down into the gloom of the trees and a 3km descent as the sun dropped into the sea and my knees became more and more like jelly. I was wobbling like one of those marathon runners by the time I reached the flat gravel track home, and have never been so glad to fall into a bath in my life.

I might never get up there again, but that mountaintop will stay with me. Like glimpsing the divine. And I had it all to myself.

The weather is forecast to change tonight, with rain and snow in the coming days. Time to knuckle down to the desk, stop gallivanting in the hills, and get some words on the page. Today was nearly a negative word count as I deleted what I’d written in the previous session, but hey, these things happen.

1 Response to Climb Every Mountain