Posted on February 1, 2015 by Jesse Blackadder

Greetings from Alaska, where I’ve spent a wild week chasing the northern lights up into the Arctic Circle.

Carol and I arrived in Anchorage on the heels of the first big winter snow dump of the season – it’s been a weirdly warm winter and a snow-drought until a day or so before we landed. Luckily for us, the drought broke with heavy snow falls, and we turned up to our little guest house in the dark of the wee small hours to find it looking like a gingerbread house in the snow. We crept inside, caught a few hours sleep and headed out the next morning into the wonder of snow. No matter how many times I’m in it, I’m always still like a kid in fairy land. 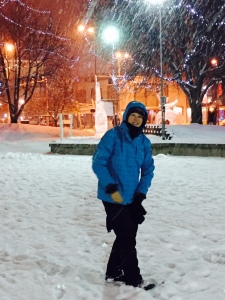 A day to acclimatise – given that we’d come from Australian summer via Honolulu – it wasn’t quite enough! We dashed out and bought a bit of cold weather clothing to supplement what we had, gambolled in the snow, walked by the sea, ate seafood chowder and drank ale, snatched another short night’s sleep, and boarded the Alaskan Railway train to chug up the interior for 12 hours to Fairbanks.

Best day! I haven’t done a long train trip in years and it was superb. There weren’t many passengers so Carol and I spread ourselves out in the dining car and lapped up the extraordinary scenery unfolding around us. Mountains, forests, frozen rivers, little bits of green running water opening up in the frozen rivers. In my head I was singing kd lang’s version of “I could drink a case of you, and still be on my feet”. I was a glutton for that landscape. I wanted the ride to last forever.

Rolled into Fairbanks quite late, hitting -25 celsius with a bang. I bravely headed out for a walk in the snow, crunching in the dark in my new boots and mittens and parka, enjoying the fairy lights everywhere and the snow-laden trees all through the park. It felt a long way from Honolulu and a very long way from home, and completely enchanting.

Next day – into a nine seater plane for the one hour flight in the Arctic Circle to the tiny settlement of Bettles with a winter population of about 15 people. And at last we stopped, for three fabulous nights, most of them at -45c, with about six hours of soft pink daylight and many hours of Arctic moonlit darkness in which to wait and hope for the northern lights. At that temperature there weren’t many other outdoor things we could do, except for short walks and a little cross country skiing. We had to h

ave lots of layers of clothes on to go outside, remember to blink often so the surfaces of our eyeballs didn’t freeze, and breathed through face masks to warm the air a little. Even in Antarctica I was never in anything colder than about -8. But there was no wind, and that made it all much easier to cope with.

And we were in luck. A beautiful display of the aurora on our first night. Nothing on the second (a chance to catch up on desperately needed sleep) and an extraordinary psychedelic display on the final night. It’s hard to describe the experience of seeing them – it’s not like the sharp lines and brilliant colours you see in photographs, as they are all taken using time exposures so contain 10-15 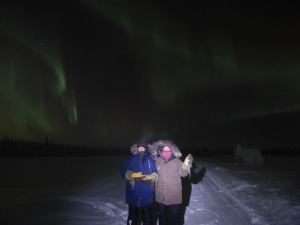 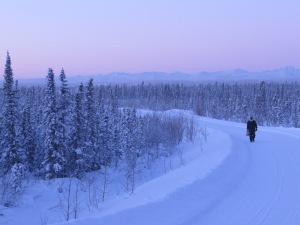 seconds worth of lights. The real thing is more nebulous, subtle, dancing, moving. I can see why people want a photo to try and hang on to, as it’s hard to even call up a memory of what they looked like. (and so here is a shot showing Cas and I with the lights!) Sometimes I had to watch them in total stillness and silence, and other times it was impossible not to shout with joy.

I loved just being in one spot there at Bettles – Cas and I certainly packed in a whole lot of activities to our first week, trying to see a few bits of this huge state.

We flew out of Bettles as the sun rose on the third morning and in the back of the plane we held hands and wept.

Why? The huge beauty of the landscape rolling out below us, our privilege in seeing it, the fact that it’s in peril (National parks said to us “there are no climate change deniers up here. No matter what you vote, you can see how fast it’s changing”). And I felt so grateful to the men and women who worked for decades to have so much of Alaska protected in wilderness reserves.

In a big lapse of judgement we chose to spend our last night in the north of Alaska visiting a hot springs resort, which turned out to be very tacky and weird. We found ourselves in the middle of “Tour Group Six” in an ice hotel, listening to the commentary in Japanese as everyone snapped photos of the luridly lit ice sculptures. Couldn’t get out of there fast enough. The hot springs were lovely but I had drunk too many cocktails in order to cope with the tackiness and was then freaked out by the sign that said don’t use the hot springs if you’ve been drinking or you could have a heart attack. Fastest hot spring soak of my life, just enough time to appreciate the temperature difference between the water and the outside air (your hair froze while your body soaked). At any rate, at least we could laugh about it.

And then it was down down down, three flights south taking us out of the snowy, icy climes and into Sitka and the beautiful south east – the wet rainforest of spruce and birch, snow capped mountains, frosty mornings and at this stage, no snow on the ground. It felt familiar and wonderful to arrive back in this town seven years after my first residency. Little has changed, people are friendly and welcom

ing, we’ve already had great conversations with neighbours, people on the street, people in cafes. We have a lovely house with a view of the mountains and we’re settling in for a month of writing, daydreaming, hiking, playing and speaking.

If you’re still with me – thanks – a long blog post to catch up as it was just too hectic to do more than post to Facebook from time to time during our first week.

Love from the land of ice and light

9 Responses to Chasing the (northern) light