One of the Literati

Winter has set in, even here in the Australian subtropics (though having been to Antarctica, people now look at me strangely if I say I’m cold). Doonas, fires and slippers are all on the agenda. The days are short, and it’s raining again. Perfect writing conditions.

You’d think being a writer would mean lots of time at the desk beavering away on the next novel. It is that, but I’m finding out there’s a lot more to it, and it all takes a lot of time. There’s the social media updates, the blogging, and of course the festivals. Author friend Sulari Gentil says that the role of writer’s festivals is to make up for the hard parts of a writer’s life – long hours working alone, neglected loved ones and the difficulty in making a living in this way (though being a writer makes a beautiful life, I must say). She might have something there – they are good fun.

I feel like a festival junkie, having been to three in the past four weeks. First up was the lovely and intimate Gloucester Writer’s Festival, which I went to for the second time. There’s a wonderful group of writers in Gloucester, many of whom I met and befriended last year, and it was a delight to launch their anthology ‘Eavesdropping’ this time around.

We had two festival dinners squashed into the Gloucester Tennis Club, the noise levels going through the roof, and some fabulous sessions, like the one on ‘chick lit’ with Lisa Walker and Lisa Heidke. The two Lisas pointed out that when Nick Earls writes about relationships it isn’t called chick lit.

Then it was off to Sydney Writer’s Festival, now the third largest in the WORLD, with tens of thousands of people attending. Talk about the opposite end of the scale. I wasn’t on the program this year, not having a new book out, so I went with my Byron Bay Writer’s Festival hat on (I’m on the organising committee) and that was a whole new experience, looking at what makes a great panel, what kinds of things authors enjoyed discussing, and how audiences responded.

The Stella Lunch was a hoot – a bunch of interesting women involved in writing and publishing are launching a new award (the Stella Prize) for female writers in Australia next year, following on revelations about inequities in reviews of books by male and female authors. Their aim is to encourage female writers and it was such a mixed bunch of us at the lunch – literary  jostling with chick lit,  erotica jostling with crime. I found out about the existence of The Hoopla, a very active website of women’s wisdom. Worth checking out at and don’t have a preconceived idea of what’s there – it’s surprising.

Radio National has podcasts of some of the main sessions and I can highly recommend Edward de Waal, author of the Hare with the Amber Eyes. I caught this broadcast as I was driving home from my trip. He cried, the audience cried, and I cried. Such a beautiful, humble human being. I bet he doesn’t spend his days on social media. Anyway, have a look at the RN page for more podcast sessions.

Then it was back to small and intimate again last weekend, going to Literati on the Gold Coast for two days of panels and discussions. That was a bonding experience for the authors, especially on the Friday night dinner. After a jolly bus trip from the hotel, we were herded into a little anteroom, plied with alcohol, then ushered one at a time into the main dining room where people were already seated at their tables. 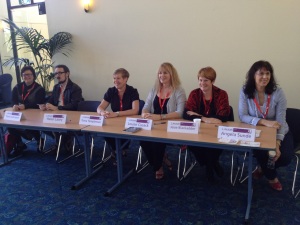 The MC read out a bio as each of us walked through the room and up to the front and picked a bit of paper out of a hat telling us where we’d be sitting for entree, main course and dessert. The pressure was on to be sparkling and interesting. Fortunately the audience members were pretty warmed up too and made us feel welcome.

I have a few weeks of normal life before the next one, which is another small festival – The Art of Words, run by Bayside City Council in Melbourne. I’m on panels there on 5 and 8 of July. And then last up for a while, Byron Bay Writers Festival from 3-5 August.

In the meantime I’m back home in the track pants and fluffy slippers trying not to get lost in the world of social media and still get some writing done. For someone as easily distracted as me, it’s a tough call.

Living at the easternmost tip of Australia on the caldera of an extinct volcano, Jesse Blackadder is a novelist, freelance writer and Doctor of Creative Arts. She is fascinated by landscapes, adventurous women and very cold places and has published three adult novels and three novels for children.
View all posts by Jesse Blackadder →
This entry was posted in News, Writing. Bookmark the permalink.

1 Response to One of the Literati