The last dog in Antarctica

Posted on November 23, 2011 by Jesse Blackadder 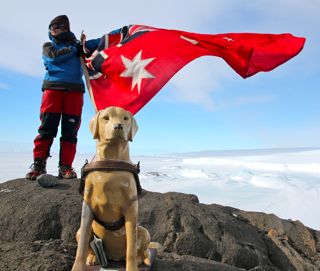 I know I said I’d come back to the story of the first woman to land in Antarctica, but I just have to digress and tell you about the last dog in Antarctica instead.

One of the most surreal moments of my trip would have to be standing by a rock cairn at the top of a high hill in Antarctica with snow and ice and rocks spreading out around me in every direction, holding a huge Australian flag that has been there in a cairn since 1939 (left by Sir Hubert Wilkins), accompanied by a lifesize fibreglass seeing eye dog called Stay.

Back in 1991, so the story goes, a group of Antarctic expeditioners were coming home from the pub one night in Hobart having drowned their sorrows about the imminent removal of huskies from Antarctic bases. Huskies were a huge part of Antarctic life, but under the new Madrid Protocol, all non-native creatures were to be removed from Antarctica for environmental reasons. This was a blow for the men and women who worked with and loved the huskies.

The expeditioners passed one of those fibreglass seeing eye dogs used by the Guide Dog Association to collect donations… in a moment of skulduggery – not the first in this story – they kidnapped her, thinking she’d be some comfort on those dog-less Antarctic bases. Apparently the plan was to take her to Antarctica, raise some funds, and hand her back a year or two later. But Stay’s adventures were just beginning.

According to an article on her in The Age last year (thankyou Google assistant Sarah), since 1991, “Stay” the guide dog has wintered at every Australian Antarctic station, conducted cultural exchange visits to the bases and ships of numerous others, and has even found her way to the North Pole – visiting the research station at Spitsbergen in the high Arctic, where she posed for a photograph at Roald Amundsen’s memorial. She has her own Facebook page (Stay Here). Her adventures include numerous sea voyages, piloting aircraft, being smuggled within mailbags and being forcibly repatriated to Hobart and incarcerated before being ”liberated” and smuggled back to the ice.

Remember how I came in by chopper from the ship when we first arrived at Davis? Stay was sitting in the new living quarters ready to welcome all newcomers to the station. However Laser Dave, our field guide, took advantage of a quiet moment to kidnap Stay and smuggle her into the Hagg so she could come with us. I don’t think I fully realised what exulted company I was in.

Stay has been a fugitive and an Antarctic legend for 20 years – and she looks a little battered. Along the way she lost a leg (apparently in a brawl between a station leader and a chippy), but it’s been cleverly replaced with a wooden prosthetic and adds to her rakish character. She wears a number of stickers from places she’s been and her Antarctic passport, which is chained to her, has some intriguing stamps.

It was great to have Stay with us in the field huts – though I’ve heard since that Dave’s dognapping stymied the plans of some expeditioners who wanted to smuggle her to Mawson station and out to a field camp. Sorry Julie! And I heard a rumour that she was coming back to Hobart for the Mawson centenary celebrations – but if she is in fact on the ship with us, she’s incognito.

What I like most about Stay – she personifies (dogonifies?) the wacky, crazy, creative, irrational side of Antarctic life that’s been part of human endeavour on the ice continent since the first explorers came here. Perhaps it’s what happens when you put humans in such an extreme environment. Alongside extraordinary feats of exploration, and complex scientific study that’s contributing to human knowledge, in Antarctica there has always been games, music, song, poetry, photography, film, recording, drawing, painting, cartooning, dance, dressing up, cross-dressing, strange practices with hair, practical jokes, comedy, books, newspapers, theatre and madcap activities like the midwinter dip. Long may the Antarctic sub culture live and thrive.

The footnote to Stay’s story – the legend also says that there’s been several collections over the years to compensate the guide dogs for the loss of Stay. I hope that’s true. If the fundraising efforts of Aurora Australis crew members for Camp Quality are any guide, then Antarctic generosity is alive and thriving.

3 Responses to The last dog in Antarctica