Posted on November 21, 2011 by Jesse Blackadder

We’re having possibly the smoothest run of all time through the Southern Ocean at the moment, with the wind behind us and the swells relatively small. But in spite of that I feel quite queasy today, for no good reason. I’ve felt much better than this in much rougher conditions, so I’m a bit annoyed with myself. One thing that seems to help is writing – fortunately – I suppose it must be the focus on something that takes my mind off it. So I’m using the opportunity to get plenty of words under my belt, stopping every so often to stare at the wall and feel blah, and then starting up again. It probably would be good to go up on deck but the journey to get my things and get up there feels too long in my current state. There’s a bit of sunshine just now and the sea is a deep dark blue. An hour ago it was snowing with big fat flakes.

At this stage of the voyage everyone has slowed right down. People are sleeping a lot – I came down to breakfast late this morning and there was only one other person sitting in the mess! There are no training sessions or anything formal organised, so it’s a time for most people to snooze, read, watch movies and eat. Sharon and Leanne have to work hard to think of things to put in the daily sitreps.

Thanks to everyone who sent me emails – it is great to meet a few of the people reading my blog and hear news from home too. With only a week or so to go my thoughts are turning to home, and what it will feel like to get back to the heat, humidity and vivid colour of the northern rivers and my sweetheart Andi.

I just wanted to tell you some of my impressions of Davis Station. When you arrive by ship you can see why it’s known as Lego land – it’s a cluster of brightly coloured containers on a rocky slope by the sea.

When I jumped out of the chopper after coming across from the ship I didn’t know what to make of it. With the partly-melted winter snow covered in brown dust and big machines everywhere, the place looked like a grubby mining camp. It’s very industrial and all the services – power, water, sewerage – run above ground for obvious reasons, so there are pipes all over the place. It’s not exactly pretty.

I trudged down the dirt road to the new living quarters building and walking inside was really different. It’s only just been finished – the winterers worked pretty hard on various building projects over the season – and I could see at once how much care and thought had gone into it. You enter via a big, well-lit cold porch with plenty of hooks and pigeonholes for you to leave your stuff (no shoes inside). Then you step into the mess with its big new commercial kitchen and spacious eating area with self serve food (and plenty of it) so you can make yourself toast or cereal or whatever if you’re hungry outside of meal time. 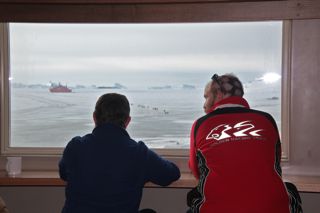 Looking out from the mess, with the ship in the background

The huge windows look out in two directions across the bay – an expansive Antarctic view showing sea ice, islands and icebergs in the distance and plenty of sky for those long sunsets. The steps up to the bar and lounge are solid wood and the steel girders that hold up the walls have been inlaid with sassafras. The wall in the bar looks like it’s made from old metal sheets and historic photos have been set into it behind glass. It felt to me like it had been constructed with real love and care and a lot of thought for how people live and work there. Everyone gets their own room on station, with shared bathroom facilities. Some rooms are better than others of course, but they all feel cosy and comfortable.

When I went on the full station tour a couple of hours after arriving I saw some other interesting spaces. The trades workshop is like a bloke shed stuffed with tools of all trades in a building the size of an aircraft hangar – it must be a very cool place to hang out. People often work on their own projects over winter, like making stuff out of wood or leather – they have a 250kg allowance of cargo, so can bring some pretty big projects down with them. Then there’s a fairly good gym – apparently this year’s winter crew got right into the gym and I can attest that there are some muscular guys amongst them. There’s a spa and sauna, which sadly I didn’t get a chance to test out.

All the stuff we carried down on the ship is kept in the green store in an enormous storage area, lifted up on to the shelves by forklifts. There’s also a kind of nerve centre building that houses comms and station management and the post office (which opens when there’s a ship in port).

I also got to visit the meteorology building where the weather forecasters and observers work – they have a fantastic spot with little bay windows for observations which just need armchairs to make them perfect. Steph showed me how she releases the weather balloons every day – a slightly scary process as the balloons are filled with hydrogen, which is explosive. I had to wear a ‘flash coat’ to watch her doing it, which is supposed to shield you if something goes wrong.

Steph filling the weather balloon with hydrogen before release

And then there’s a scattering of funny little containers and buildings around the place that are empty or mysterious or in the process of being refurbished. I find this mixture of ugliness and beauty in the station and its surrounds just fascinating. I could imagine becoming very fond of it. 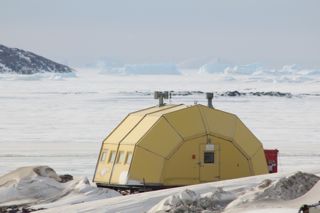 The 'Pineapple' at Davis

Our talk tonight is from some of the winterers showing photos and videos and talking about their year. One thing I’ve seen over and over is the creativity this place inspires. Amazing photos, time lapses and videos are the most obvious ones, but you see creativity everywhere – some of the guys on duty by the ship during the unloading carved a snow penguin with a knife. 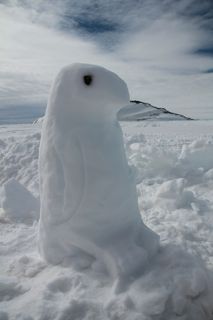 OK, it’s back to the novel again. Tomorrow I’ll give you the latest instalment on the first woman on Antarctica, now that Cookie and I have been pouring over old photos and maps…