Posted on November 15, 2011 by Jesse Blackadder
Tuesday morning and we’re steaming steadily ahead in fairly open water. There’s a bit of grease ice around (think Margarita texture) which slides easily under the ship, and lots of stately icebergs, which are just encouraging me to add to my photograph

ic collection of icebergs. Someone on the station said the record for the number of photos over a season (winter and summer) was something like 50,000. Fortunately I don’t have that many, but I can see how it would happen – it’s hard to take a bad photograph in Antarctica and every piece of ice has its own beauty. Though it may not seem that way to friends and family members who have to look at 50,000 images.

My brother Stu emailed me early in the trip and said he’d read somewhere about rare bottle-green coloured icebergs that you can sometimes see in Antarctica. I figured that would be asking too much. But…go back a few days to our first arrival…

The day we pulled in to Davis (in the midst of the reverse park), Sharon the voyage leader grabbed me after breakfast and said get your stuff, we’re going to chopper some people in to shore. My cabin mates (who were high on the flight priority list because forecasters are needed if any flying is happening) and I raced back upstairs, stripped our beds, struggled into our many layers of outdoor gear, grabbed our bags, and lumbered back down the lounge ready for an imminent departure. In true hurry up and wait fashion, we sat there with about 20 other people for the next two hours, sweating in our heavy clothing, and then the shuttle flights started. I was on flight number 9 and my companions kindly let me have the front seat as it was my first time in a helicopter. It only lasted about 4 minutes but it was thrilling to lift off from the ship and zoom across the sea ice to the station and a friendly welcome from a couple of winterers waiting at the landing pad.

Then we trudged down the road to the new Davis living quarters – beautifully built over the last year – and I met Dave (also known as Laser or Fluffy) who was to be the guide for my field trip. Our adventure was also a familiarisation for Martin, the field training officer who’d been on the ship with me, and a consolation prize for Chris, another ship mate who found out the day before we arrived that he’s being shipped back again because of a medical problem requiring further tests – pretty devastating news. Dave said we’d get ourselves organised and go out in the Hagglunds after dinner for a two night field trip to a couple of field huts. 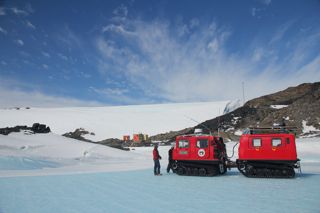 We headed off after dinner – loaded into the red Hagg which is an incredibly cool way to get around on the sea ice – it felt like it could just about go anywhere. (Though later on Cookie said to me “You’re travelling on a four tonne vehicle over a 1.5 metre skin of ice above a kilometre deep sea” which was thought-provoking). We headed out on the sea ice into iceberg alley…what’s the collective noun here? A ‘magnificence’ of icebergs that have come to rest on the sea bed and then been frozen into place by the sea ice. The bergs are shades of azure blue dusted with white snow and the sea ice is the mottled blue-grey of duck egg, also dusted with snow that has been blown into fantastic shapes and then frozen into white waves known as sastrugi. 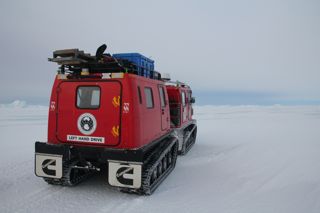 The Antarctic twilight, which goes forever, deepened and deepened as we bounced along in the Hagg and every time you thought it couldn’t be more heartstoppingly exquisite, the colours would drop down a notch and new shades of mauve and purple and blue and pink would emerge.

Then Dave said ‘I’ll see if I can find the jade iceberg. It’s around here somewhere’ and we headed further out on the ice shelf. A few times I saw something different in a berg and said “Is that it? Is that it?” and finally Dave said “You’ll know it when you see it”.

That was an understatement. As we came around some bergs the jade berg was in front of us, looking like someone had taken a huge chunk of marble and dropped it on the ice. The green colour apparently comes from algae in the water when it froze originally (though I can’t Google that to check). We stopped the Hagg and got out. By then it was pretty late – after 11pm – and the twilight was deep, so the colour looked very dark rather than green. Two Adelie’s obligingly posed in front of it for a photo.

My God, I’d only been on the continent a few hours and already a jade iceberg.

It’s time to get dressed for our ship muster – a safety drill where you get into all your cold weather gear and lifejacket and take your survival bag and go up on deck. They generally keep you up there for some time to punish anyone who couldn’t be bothered getting dressed properly. It was an effective punishment on the way down, but it will take a lot more than 20 minutes on deck to make a winterer feel cold.

1 Response to The jade iceberg