Can’t quite picture that…

Posted on November 13, 2011 by Jesse Blackadder
Sarah emailed saying she couldn’t quite picture how the ship was moving through the ice and what happened when it stopped – wouldn’t breaking the ice make it weak close to the ship? And how could the ship get out again with ice all around?

Good questions! Basically the ship broke its way through thicker and thicker ice to get here (by moving back and forward, back and forward, as I’ve already gone on about), ending up with its front wedged into thick sea ice and a trail of open water behind it, with an unstable area of ice surrounding that trail. Once wedged firmly, a pump or engine of some sort has 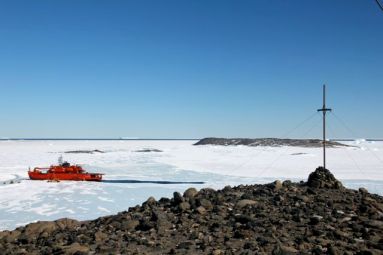 been running ever since to keep a section of open water at the back of the ship so it can reverse and turn around when it’s time to leave, and break its way out again (as our trail from arriving will have frozen up and drifted). We’re strictly forbidden from going anywhere near the back of the ship where we’ve cracked that huge hole in the ice. 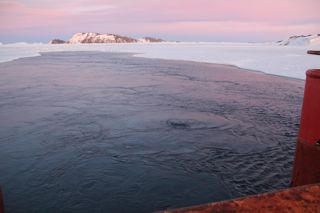 Here’s a pic from the back of the ship that I took during the looooong shift this morning hanging out on the trawl deck while the water was pumping. Some Adelie penguins liked the man-made lake and settled down for a snooze beside it (they are probably too small in the picture.

Last day on station by the look of it – and the conditions are perfect for a helicopter flight, so cross your fingers someone has time to take me up. I have to wait while they put a pig through the fuel line and then I’ll find out.

Yes, a pig. I can’t quite picture that either.

1 Response to Can’t quite picture that…