up up and away SEC=UNCLASSIFIED

Posted on November 9, 2011 by Jesse Blackadder

We are nearly parked, so they are telling us. Now there is some serious hanging around, as we have to be ready to disembark at fairly short notice. Sitting in the mess, chatting, drinking cups of tea, waiting waiting waiting. Outside Davis looks exactly like Legoland – a cluster of brightly coloured boxes on brown rocks a kilometre or two away. At the moment there’s beautiful sea ice as far as the eye can see (hence our slow approach), but in a month or so it will all be melted. I’m so glad I have the chance to see it like this. 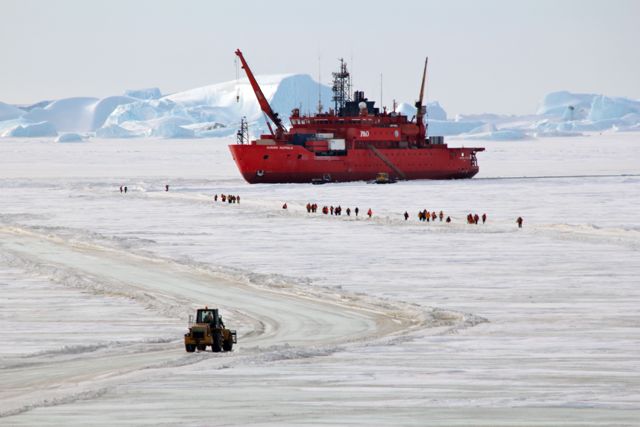 Julie called out to me over breakfast, “Hey Jesse, good to see you’re staying for summer”. (She’s already told me I need to go out in the field with her and her crew so that I can keep doing my blog as her family and partner are enjoying it so much.) She pointed to the noticeboard, where the voyage leader has put up the rogues gallery pictures and names of the 27 people making the return leg. There’s a blank under my name. That’s it, I’m officially AWOL.

OMG. The voyage leader just grabbed me this minute and said get your stuff, we’re flying you off in the chopper!

Here I go – likely to be offline several days as I go adventuring.

6 Responses to up up and away SEC=UNCLASSIFIED