The little engine that could… SEC=UNCLASSIFIED

Posted on November 9, 2011 by Jesse Blackadder

I understand the origins of the word “inching”. We’ve spent the day inching towards Davis, two steps forward, one back, getting as close as possible. But we’re not there just yet and everyone has unpacked their jamies and toothbrushes for another night on board. We can see Davis Station across the ice, it’s not far away now, maybe three or kilometres and I guess we’ll get the ship wedged in the fast ice tonight and be heading over in the morning.

It’s incredibly beautiful. The frozen sea ice is flat and slightly translucent under a dusting of snow, looking a bit like a giant iceskating rink, and there are huge blue icebergs dotted everywhere. Lines of Adelie penguins waddle back and forth in front of the ship – they seem much less concerned by the big red monster bearing down on them (or should I say, inching down on them) than the penguins out on the sea ice, which fled in terror from us. Reminds me of that wonderful scene in Happy Feet where the penguins ran away from the leopard seal in slow motion, taunting him. 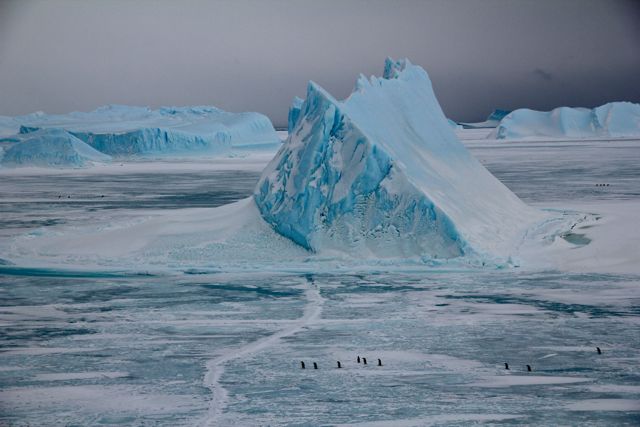 1 Response to The little engine that could… SEC=UNCLASSIFIED