Are we nearly there yet? SEC=UNCLASSIFIED

Posted on November 8, 2011 by Jesse Blackadder

The bridge and all the outside decks are closed while we manoeuvre slowly slowly into the thick ice, and it feels odd because there’s no place to really see what’s going on – all I can do is peer through the portholes, which only give a very limited view. Everyone’s packed up, the cabins are all clean and inspected and we’re hanging around waiting, feeling the ship rock and tilt in slow motion as it muscles closer and closer to shore. People are lounging in their cabins with the doors and privacy curtains open, standing in groups in the corridors chatting, waiting to make phone calls and someone is rowing down in the gym, perhaps trying to win the Aurora 10km rowing challenge (I think the fastest time so far is pretty close to 40 minutes). There’s a feeling of subdued excitement in the air. 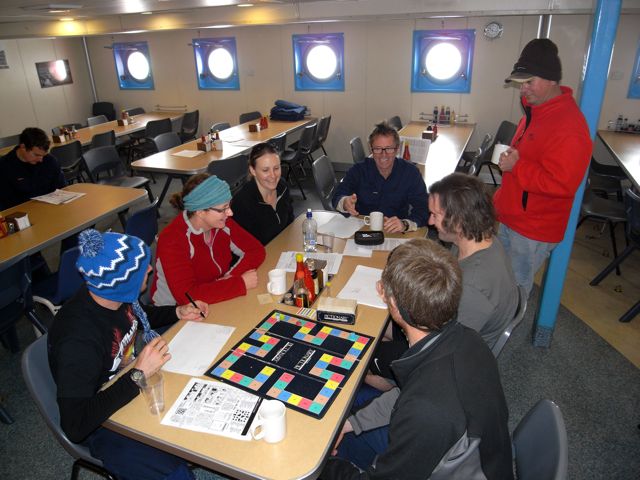 Although a priority fly-off schedule was drawn up for people who need to be on the station quickly (such as the weather forecasters, who are needed for planning any flights), it’s too windy to chopper key people over to the base, so we all have to wait until the ship is in position and we can get off the old fashioned way. The ship has to end up wedged securely in ice that’s thick enough to take the weight of the containers we’ll be unloading and the cargo vehicles trundling back and forth, ferrying it all to the station. To keep an eye on safety, they drill down into the ice and measure something called the freeboard, which is how high the water rises in the hole. It indicates the load that the ice can bear. If the water comes to the top of the hole, run like crazy.

The sound of crushing ice against the hull is roaring in my ears – it’s just a few feet away from where I’m sitting. Antarctica’s ice causes it to grow and shrink dramatically each year – in winter the pack ice expands out from the coastline at the rate of four kilometres a day, extending to nearly 3000 kilometres from the coast and doubling the size of the continent, until it’s about as big as Africa.

We’re finally seeing Antarctica itself. Did I say before, that the area of land we’re looking at (if we could look) is called Ingrid Christensen Coast? Having slid and broken and smashed our way through so much ice, I’m amazed that those whaling ships could get so close to the continent, as they weren’t icebreakers. However most of their visits were in early February when the pack ice has melted down to its minimum size, before the freezing cycle begins again in March.

On 19 February 1935, Klarius Mikkelsen (who was the captain of Lars Christensen’s whaling fleet resupply vessel that year) and his wife Caroline landed very close to here and he named the area Ingrid Christensen Land after Ingrid, perhaps sympathising with the fact that by then she’d been to Antarctica three times but never landed. Or perhaps he was trying to curry favour with his boss, Ingrid’s husband Lars. I don’t know if he named anything after his own wife – perhaps that would have been a bit presumptuous of him.

It looks like I have a chance to visit Caroline’s landing place at any rate. I’m still hoping that one of the aircraft ferrying people and cargo across to Mawson base might be able to squeeze me in so I could at least fly over the area where Ingrid landed on 13 January 1937 at what’s now called Scullin Monolith (though then, funnily enough, it was known as Klarius Mikkelsen Mountains).

That’s probably enough Antarctica facts and history for today. I can see land and islands through the porthole – very exciting.

2 Responses to Are we nearly there yet? SEC=UNCLASSIFIED