Posted on November 2, 2011 by Jesse Blackadder

There are 56 stairs between the mess and the bridge – 8 flights of 7 – and it’s a good thing because otherwise I’d be waddling. The food here is too good, too regular, too much to chose from, too many courses and too available outside mealtimes. The steps are all that’s standing between me and my downfall (though now the ship isn’t tossing, the gym is a possibility). I’ve been up and down three times since midnight and it’s only just after breakfast.

I got up to try and catch the sunrise this morning. Renato, one of the incoming station chefs, volunteered to do the 4, 5 and 6am iceberg obs and witnessed a glorious sunrise yesterday. He reckoned it came up about 4.15, but said I should get up at 3.45 to make sure I was ready. However we had to put the clocks back an hour last night, so that made it 2.45. Yes, AM. At that hour it did look light outside so I got up very quietly, got dressed, grabbed my camera bag and headed for the bridge (6 flights of 7: 42 stairs). It was gloomy and beautiful outside, and got a lot lighter while I was standing there peering blearily out of the front windows and catching sight of two startled Adelie penguins looking up at the big red ship in disbelief. But it was cloudy and there was no sign of the sun. Renato fiddled around with one of the many computers on the bridge 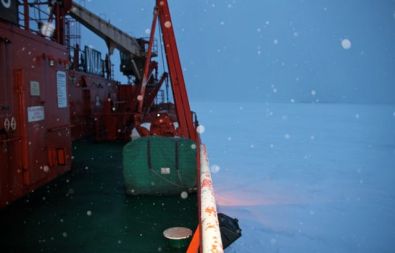 that show all sorts of interesting things and found that sunrise was scheduled for 5.15am. By then it was about 3.30am. That was it for me, back to bed and by the time I woke, any sunrise was long over. There aren’t too many sunrises at Davis, so they will become a bit of a novelty in coming weeks.

At this point of the voyage you start carrying STUFF around with you. If you want to go outside for more than a few minutes you need beanie, gloves, scarf, jacket. The ice is so bright that the AAD issue polarised sunnies are out of the bag and in use. You have to try and remember to drink more water. My camera has three different lenses. And there’s 42 stairs between the cabin and the bridge.

Today and tomorrow is micro-cleaning, when you take all your gear down to the wet lab and vacuum the pockets and seams and scrub the soles of your boots to make sure no alien material gets carried to Antarctica. I did a fair bit of that at home before I left, but you have to have your gear ticked off, and I guess it doesn’t hurt to do it again. There’s also training in knots and GPS navigation.

I’m going out on a field trip pretty much as soon as we arrive, which is brilliant news. I’ll be travelling with two people who know what they’re doing out to Bandits Hut on a hagglund (an Antarctic machine that looks like a cross between a bulldozer, an SUV and a light rail carriage) and might have a chance to try for Mikkelsen’s Cairn, where Caroline Mikkelsen landed in 1935. My dream is to get to Scullin Monolith where Ingrid landed, but that’s a major proposition being much further away and requiring a flight, so it’s unlikely. But I can hope. And hey, I won one of the Melbourne Cup Sweeps, so my luck is good right now.

A few Antarctic regulars on the bridge the other morning complained that it had been such a smooth voyage weather-wise there was nothing to talk about. I said what about the other night when it was seven metres?! They smiled and said Oh that was nothing.

2 Responses to The Stairmaster SEC=UNCLASSIFIED