Posted on November 1, 2011 by Jesse Blackadder 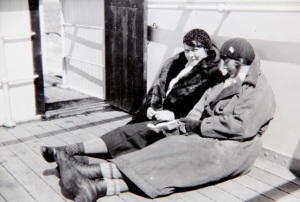 I’m giving a talk and slideshow about my research on Wednesday night, so it’s time I refreshed my memory – and some of you might be interested in knowing more about my project.

I’d like to introduce Ingrid Christensen (left in the picture) and Mathilde Wegger, who were sailing across the Southern Ocean eighty years ago (in 1931) and were the first women known to have seen Antarctica. Like me, they were passengers on a resupply vessel doing a six week round trip to eastern Antarctica. Like Aurora Australis, their ship Thorshavn had to carry cargo in both directions – its tanks were full of fuel oil on the way down, and whale oil on the way back, pumped out from the fleet of factory ships that were whaling in Antarctic waters.

Ingrid was 40 and she left her six children (aged from 6-21) at home. Mathilde, a widow, was 36, and also left her two children behind.

You’ll remember from my previous post, that although plenty of women were up for the adventure of Antarctica, they had no success in applying through the channels open to men. Ingrid and Mathilde made it because Ingrid’s husband Lars Christensen owned a whaling fleet, was extremely wealthy, and had a personal interest in exploration. Ingrid was able to travel with him in comfort and take her friends with her.

I’m often asked why I became interested in Ingrid. This is why: she travelled to Antarctica four times in the 1930s. On her first three voyages there were never good landing conditions in the areas in which they were travelling. The year after Ingrid’s third voyage, one of the whaling captains in Lars’s fleet took his wife south. They were lucky – there were good conditions for landing – and so they put to shore not far from where Davis Station is located today, and Caroline Mikkelsen became the first woman to land on Antarctica. Her husband named that part of the coast “Ingrid Christensen Land”.

Whether Ingrid minded missing out isn’t recorded – in fact there’s nothing much written of what she thought about Antarctica or why she travelled there. But she did go one last time the following year and, along with her oldest daughter Sofie, and two other women (Lillemor Rachlew and Solveig Wideroe), she landed on the Antarctic continent at what’s known today as Scullin Monolith. I have a picture of her and Lars standing by a cairn with the Norwegian flag flying.

Now that’s a spot I’d love to go to (and see if the cairn is till there) – it’s located between Davis and Mawson stations, but it’s a remote area and is a bird breeding site. From what I understand, no one’s been there for years and I think exploring it will remain a dream for now.

So – Ingrid was an interesting and obviously adventurous woman, forgotten by history. She was irresistible to me, and a good subject for a novel where I could play with ideas around women, first arrivals (and the nonsense that can go with that idea) and Antarctica.

My research is digging a little deeper into the details of Caroline Mikkelsen’s landing and Ingrid’s later landing and whether, in fact, Ingrid was the first woman to set foot on the mainland. But you’ll have to wait to hear more about that.

Thanks to the Sandefjord Whaling Museum for permission to include this photo of Ingrid and Mathilde.